I really, really enjoy the benefits of working out, and I’m sure there isn’t a person out there that doesn’t.  Endorphins, feeling tight, more energy, not feeling like a weakling – some of the many many great things that result from a proper workout.

But sometimes even that isn’t enough to get me up and off my Po and into my sweats!  I am the master of procrastination, and getting up in the morning or going out of an evening to exercise was sometimes an ongoing battle for me.

So with that awesome personal attribute being well known to me, I decided to try a different approach to exercise. Training with other people!!!!!  Breakthrough stuff, I know.

Now, I’m not talking about a group class at a gym.  I used to do that for a really long time, at least 3 times a week.  I did see results (limited), however there were some key factors that finally resulted in me not going anymore:

In this setting it was easy for me to blend in and not really concentrate on what i was doing for an hour (which for me is too long). 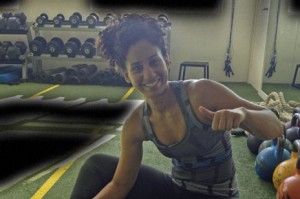 Eventually I tried a ‘gym’ in Sydney that only offered small group classes.  At first I was sceptical as i already had a preset view of what group training was.  But when i got there and tried it, i realised how group training is supposed to be.  The classes were small and personal, everyone was excited and wanted to be there, we knew what we would be working on before we got there, and although we did most exercises individually, we always worked as a group and helped each other out.

The instructors were knowledgeable, friendly and interested in us and our progress individually. This new place wasn’t as convenient for me to get to as i would have liked.  It required extra time, effort and money to get there.  But i went there multiple times per week and at all different times of the day because it was effective, fun, and I was finally a part of an exercise community.

Unfortunately I had to end my time at this wonderful place as it was time for me to move here to Frankfurt!  I have been enjoying getting to know Frankfurt and the way of life here which is so different to Sydney.  I was hoping to find a similar group training setup to start attending here, however to my disappointment, I found only a couple that are vaguely similar and quite far away.  In saying that, I started attending one that moved a bit closer and i have been enjoying it when I go, but its still not exactly what I want.

I have a personal training background and was looking to get back into the industry once settled here in Frankfurt.  That time has come and I thought, why not just build something that i once loved and was a part of?

If I, the master procrastinator, can find something that gets me excited to go to at 6am session, there has to be others out there that want it too!  Let me show you how it works…